The Rijnland II is fully operational. Every now and then we can ask you to board in another city like Haarlem or Alkmaar, which is easily reached from the airport. The next day we sail to Amsterdam. We don’t charge for this extra trip.

It is possible to plan your own trip all over Holland and Belgium. Rotterdam for instance, the worlds largest port, takes just one day to reach by ship. Belgium is only two days away from Amsterdam. 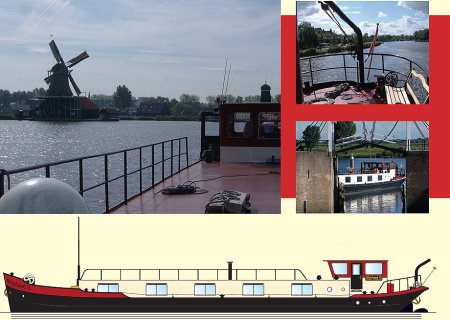 We can make various trips.

There are a few standard arrangements:

Amsterdam is the third largest seaport of Europe. We make a tour through the harbour and show you the places of interest. This tour takes about three hours.

A one-day trip to a place of interest. After a short stay we return to Amsterdam. Suggestions: Zaanse Schans, Ouderkerk a/d Amstel, Haarlem, Volendam, Muiden, Aalsmeer.

A two-day trip to a place of interest. You stay overnight and return to Amsterdam the following day.

After you made your booking I will send you the details of your trip, and will inquire after any particular wish or request you might have, and will answer any questions you have.

I hope we will meet soon, and I wish you a comfortable and exciting stay on board the Rijnland II. 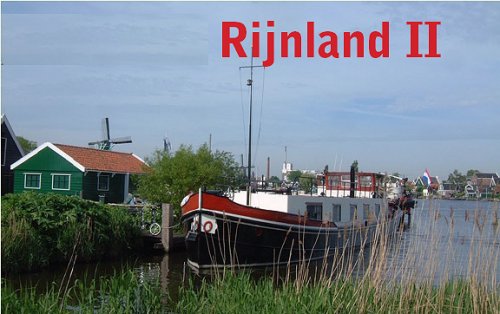 On arrival you will find all linen is provided. The beds are made and the bathroom has plenty towels. Music can be played, the CD-player is serviced from the wheelhouse. Music can be listened to in the living room and in the wheelhouse. The kitchen is fully equipped with pots, pans and cups. It also has a toaster to make toast for breakfast, and is amply supplied with coffee, tea, etc.

The bathroom has towels, soap and a hairdryer, has floor heating and is nicely coated with marble. Water pressure of the shower is high so you will enjoy a comfortable shower in the morning! The toilet is in a separate space.

The DVD-player goes with a standard supply of 16 DVD’s with the latest movies. The TV has 26 channels through digital connection with the shore. There are no internet facilities on board.

The airconditioning keeps the ship cool in summer. In winter the ship has central heating.

The Rijnland II has a storage capacity of 20,000 liters of fresh water. Because the ship is regularly making tours, it is for its electricity fully self-supplying using a generator. The generator has a specially designed silent packing and can be turned off at any time. When the generator is turned off, power is supplied by batteries which can provide the ship with electricity for a longer period. Temperature within the ship is regulated by a climate control system. On arrival all will be explained to you and is very easy to operate.

A tourist guide is provided with a street map of Amsterdam. The ship has a desk with all kinds of tourist information about Amsterdam and many other places of interest you may want to visit with the Rijnland II. On arrival you will be instructed on the equipment, the mooring place and where to buy your groceries. We will also discuss with you the details of your itinerary.

Living aboard the Rijnland II is as simple as being at home, so you won’t have any problems finding your way around! 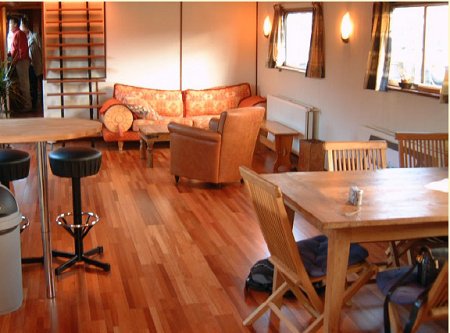 The Rijnland II is an old barge with the characteristics of its original destination and all the comfort of nowadays.

Because of the many canals and other waterways in Holland, transportation was most efficiently carried out by ships and barges. In 1923, the year the Rijnland was built, the diesel engine was a relatively new invention which was soon applied in ship-building. Thus transportation by water became more profitable and reliable.

Because of the specific characteristics of the Dutch waterway system, shipsof special size and measurements were required for the often narrow canals (and, especially, the locks) to be able to sail to and from major cities like Rotterdam, Amsterdam, Utrecht and Alkmaar. Many canals and locks had been constructed as early as the beginning of the 19th century. Consequently shipbuilders always had to take into account the restrictions and possibilities placed on their designs by the existing waterways.

The Rijnland II is a so-called “Katwijker” : specially designed to go to “Katwijk aan Zee” a place near the North Sea, the first coming off the slipway in 1916 being the Rijnland I. Nowadays few Katwijkers are left, and the remaining ones are no longer in service.

The Katwijkers in their time were famous for their strong and sturdy hull. They were pre-eminently the ‘supermarket’ and transportation ships of the 1920’s and 1930’s. The Rijnland II has been in service until 1961. By then, with its size of 27 m. by 5.4 m. and a cargo capacity of 220 tons, it couldn’t compete any longer with modern ships.

The owner at the time decided to change it into a house-boat, which could then be moved to herever he wanted. From 1961 until 2002 he lived on the Rijnland II, in various places. The ship has been in Belgium, France and Germany, amongst others. In 2002 he decided to retire and live ashore.

The Rijnland II was then bought by Erik Termeer. Because of the ships strong contruction and unique size Erik decided to transform the barge once again into a luxurious living accommodation. After one year of reconstructing the Rijnland II has become a most comfortable residence! It still retains the characteristics of its original destination, but with all the comforts of modern times.